Engine cadet Marks and 11 others were killed aboard the Liberty ship Timothy Pickering on July 13, according to the U.S. Merchant Marines. 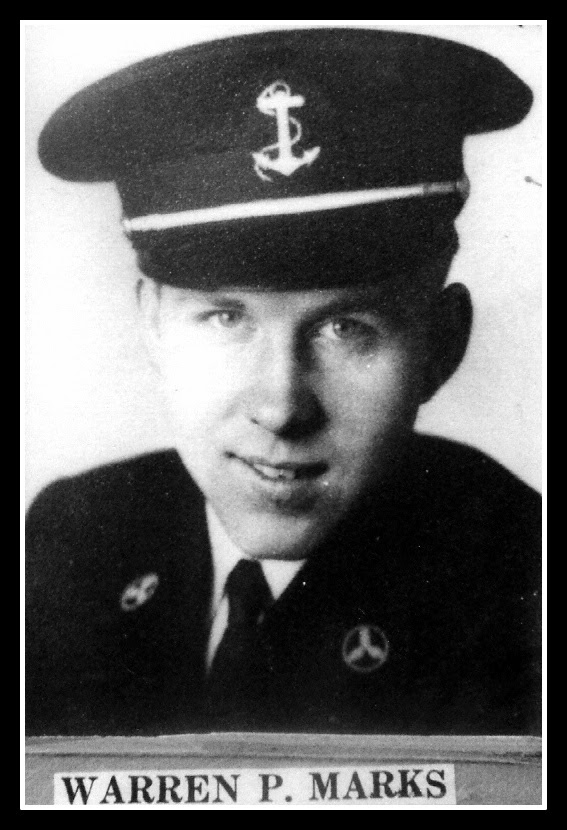 The  vessel was bombed and sunk by aircraft while anchored at Avola, Sicily.

Marks has a sister, Annis Jean, and a brother Roger Dow, both living at home.

In a letter sent Aug. 31, 1943, to his surviving sons Pete & Dave serving in the war, Mr. Lyman reports of the death of his son William "Boots" Lyman aboard the Pickering as told to him by survivor Chris Breman:

"... To save you all the time of reading this in order to get to the point, I will tell you now that three of the four are lost and Bill is no doubt one of them ... They were blown to bits in the Port of Siracusa in Sicily taking in troops and supplies to back up our men who had already been landed ... they were put into the Sicily job with plenty of other ships and sailed to their end as I have told you. They had gasoline and TNT in their holds waiting to be unloaded when at about 11:30 a.m., on July 13, two dive bombers came over the high hills with motors shut off and were not seen in time for the ships to open up on them and they planted a good fair sized on the deck and in a second the Pickering blew to bits and there was nothing where she had been ... Bill was on deck getting washed to get on his deck watch at noon and ... he was not seen again. Warren was in the engine room on watch and was never seen again. ... The two planes were knocked down by the other ships a second after ..."

From The Nutley Sun: September 3, 1943- Midshipman Reported Killed In Action In Mediterranean
Posted by ARB at 7/13/2013 No comments: Links to this post

(October 8, 1943) -- A paratrooper in the opening invasion of Sicily, Cpl. Percy W. Shuart, 23, was killed in action there on July 11, his mother, Mrs. Patrick O'Neill, of 154 Whitford Avenue, has learned through the war department. 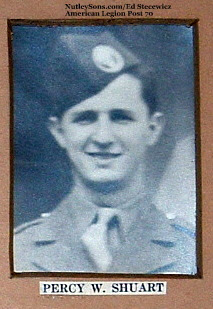 A subsequent letter from Gen. Marshall informed Mrs. O'Neill that her son had died ''gallantly in action,'' and that she had every reason to be proud of him.

He is also survived by Mrs. Thomas Murin, who resides at the Ambassador apartments on Park avenue.

From The Nutley Sun

October 8, 1943
CPL P.W.SHUART
KILLED IN ACTION
Member Of Paratroop Invasion
Of Sicily, There Only A Month

Remembering the Men Who Paid For Our Freedom.
Nutley, New Jersey.
Copyright © 2002-2015 by Anthony Buccino, all rights reserved. Content may not be used for commercial purposes without written permission.

Belleville and Nutley In the Civil War