Informed of Son's Death In Action In South Pacific 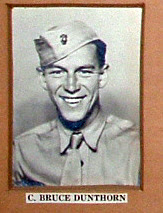 (March 3, 1944) - In a telegram received Wednesday from Lt. General A. A. Vandergriff of the U.S. Marine Corps, Mr. and Mrs. Cyrus W. Dunthorn of High Street were informed of the death in action Jan. 15, of their son, Pfc. Cecil Bruce Dunthorn, 22, of the celebrated Fifth Marines.

Two days before they had received a letter from Pfc. Jon La Barbera, one of Bruce's buddies telling them of their son's death while on a mission early in February during the invasion of Cape Gloucester, New Guinea.

Lt. Gen. Vandergriff's wire stated that Bruce was "killed in action in the performance of duty and service of his country."

Pfc. La Barbera wrote: "Before he passed away, Bruce asked me to write home for him. I have known Bruce for two years and we've been through thick and thin. When we lost Bruce, we lost the squad. He was undoubtedly the best. Two boys attempted to bring him to safety but did not succeed. One of the boys was wounded, the other was not hurt." When he returned he would be able to tell the story in detail.

Mr. and Mrs. Dunthorn last heard from their son in a letter written Jan. 24, in which he had asked that some toothpaste be sent to him. Earlier, in reply to a letter from his parents in which they had asked what he would like to have for Christmas, he had written that he wanted "only a handful of snow."

Pfc. Dunthorn, who was a sniper scout, had also taken part in most of the battle of Guadalcanal. He had been left behind in New Caledonia because of a broken wrist, but a few days later managed to stow away on a bomber and joined his unit at Guadalcanal.

He entered into the Marines the day after Pearl Harbor, and trained at Parris Island, S.C., and New River, N.C. His unit left New River in May 1942 for New Zealand where they went through an earthquake a day or two after arrival.

After Guadalcanal, Pfc. Dunthorn was evacuated to Brisbane, Australia, going from there to a town near Melbourne for a short rest. He later went to New Guinea for several months duty there.

On Feb. 4, Mr. and Mrs. Dunthorn had received word that their son had been recommended for the Navy V-12 training program in this country.

He is a graduate of Nutley high school.

A brother, Lt. Cyrus Dunthorn Jr., 25, is serving with an ordnance ammunition company in the Aleutians. He was graduated from Nutley high school and won a scholarship to Stevens Institute of Technology in Hoboken. He later attended Rutgers university.

Another brother, Gunners Mate s/c Byron Dunthorn, is in the Navy armed guard and is captain of a gun crew on a merchant ship. When he last wrote to his family, he was in Scotland. He is also a graduate of Nutley high school and enlisted on Navy Day.

More Information
Posted by ARB at 1/15/2014 No comments: Links to this post

Remembering the Men Who Paid For Our Freedom.
Nutley, New Jersey.
Copyright © 2002-2015 by Anthony Buccino, all rights reserved. Content may not be used for commercial purposes without written permission.

Belleville and Nutley In the Civil War